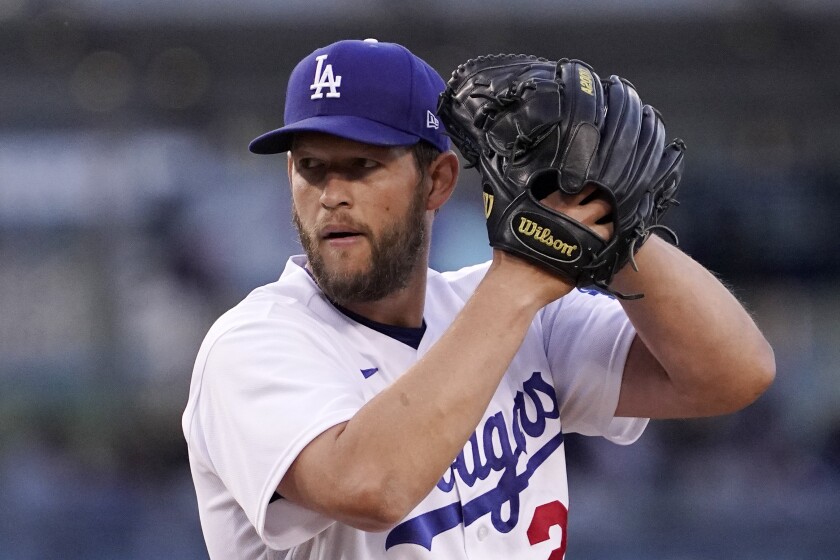 Friday the 13th was not a good day for the Dodgers.

The misfortune began with the team placing Clayton Kershaw on the 15-day injured list in the morning and ended nearing midnight with a 12-10, 10-inning loss to the Philadelphia Phillies at Dodger Stadium for their third straight defeat.

Justin Turner blasted a game-tying two-run home run with one out in the ninth inning, but the Phillies scored three runs off Brusdar Graterol and escaped a bases-loaded, no-out jam in the 10th to begin the four-game series with two high-scoring wins.

Walker Buehler, whose start was moved up from Saturday to replace Kershaw on four days’ rest, recorded his worst performance of the season before the bullpen bungled a one-run lead.

Buehler gave up a season-high five runs on nine hits with just three strikeouts over five innings. He surrendered a two-run home run to Kyle Schwarber and two run-scoring hits to Bryson Stott, the Phillies’ No. 9 hitter who entered the night with a .111 batting average.

The Dodgers’ offense offset the uncharacteristic outing with a five-run third inning and another run in the fourth to take a 6-5 lead. Chris Taylor Homered. Mookie Betts and Justin Turner each plated runs with a double. Max Muncy and Austin Barnes delivered RBI singles. They chased Kyle Gibson after 3 2/3 innings.

But Alex Vesia and Evan Phillips then combined to yield three runs in the sixth inning and the Dodgers (20-11) never led again. Bryce Harper added a solo home run in the eighth inning after clubbing two doubles in his first four plate appearances for the Phillies (16-17).

Harper’s success prompted the Dodgers to intentionally walk him in the 10th inning with a runner on third base and one out. Nick Castellanos then laced a groundball down the left-field line for a go-ahead two-run double. Moments later, Castellanos broke for third base, forcing an errant throw into left field from Barnes behind the plate to score the long night’s final run.

The Dodgers’ three-game losing streak is their longest of the young season. It’s a minor bump on a long road. The bigger loss is Kershaw.

The veteran left-hander landed on the injured list with right sacroiliac joint inflammation. The sacroliac joints are in the hip, where the spine and pelvis connect. Inflammation causes lower back pain. Left-hander Garrett Cleavinger was recalled to take Kershaw’s place on the roster.

Dodgers manager Dave Roberts said Kershaw began experiencing discomfort on the team flight from Pittsburgh on Wednesday night. He received an epidural injection to dull the pain Thursday. Kershaw said an MRI exam didn’t reveal any structural damage, but the discomfort persisted enough for the Dodgers to decide to shelve him even as they navigate a grueling stretch with an already shorthanded pitching staff.

“I don’t feel great right now,” Kershaw said. “It’s a little sore right now. But I’m confident that by the time my [injured list] stint is over, I should be close to ready to go – if not ready to go.”

Kershaw has a long history of hip and back trouble. In 2012, he missed a start because of pain in his right hip and nearly required offseason surgery. Four years later, he missed two months with a herniated disc. He’s also missed time in 2017, 2018, and 2020 with back injuries. Kershaw on Friday confirmed he’s dealt with his current issue before.

“Clayton’s body’s really responded in the past to the epidural,” Roberts said. “So I think for all of us, we’re hopeful that we can get through this and expect him to make all his starts when he gets back.”

Kershaw’s absence surfaced at an inopportune time for Los Angeles. The Dodgers are in the middle of playing 31 games in 30 days, including a doubleheader Tuesday. Roberts said the club is intended to temporarily using a six-man rotation to withstand the schedule. That plan has been aborted. Now it’s about just figuring out how to get through the next week.

The first step was moving Buehler up to Friday and Julio Urías from Sunday to Saturday. There are questions after that. Tony Gonsolin will start either Sunday or Monday. Michael Grove or Andre Jackson, both minor leaguers, will start the other game.

Grove, a second-round pick in 2018, has never pitched above the double-A level. Jackson has a 6.14 ERA in five starts with triple-A Oklahoma City after making three big-league appearances last season.

As for Tuesday’s doubleheader against the Arizona Diamondbacks, Tyler Anderson will start one game and Ryan Pepiot will likely start the other. Pepiot logged three innings in his major-league debut Wednesday in Pittsburgh before he was optioned.

Jackson, Grove, and Pepiot are the only healthy starting pitchers on the 40-man roster not on the team.

Andrew Heaney has been on the injured list for nearly a month with a shoulder injury and just recently resumed throwing. His return is not imminent. Mitch White is still building up strength after testing positive for COVID-19. David Price is expected to return from his COVID-19 absence next week, but Roberts said Price will remain a one-inning reliever upon his return.

Then there’s Kershaw. Friday’s move interrupted a strong launch to the 34-year-old’s 15th season after deciding to return to the Dodgers on a one-year contract. In five starts, the future Hall of Famer owns a 1.80 ERA with 32 strikeouts to two walks. He threw seven perfect innings on 80 pitches in his season debut against the Minnesota Twins, igniting a national debate over Roberts’s decision to pull him six outs from history.

Roberts said he was protecting Kershaw from injury months removed from Kershaw nearly needing Tommy John surgery. Kershaw approved the decision. The uproar continued anyway. On Friday, the team again opted to take the cautious approach with him.

“He came back here to give us a chance to win a World Series this year,” Roberts said. “He knows when to push, when not to push him. And right now is not that time. So, to take a step back, and to kind of listen to your body, it’s the prudent way to handle it.”

The Dodgers can afford taking the long-term approach. The National League West appears loaded with the San Francisco Giants and San Diego Padres playing like legitimate contenders, but they’re confident about reaching October for a 10th straight year. A lousy Friday the 13th in May would be long forgotten by then if they do.

Suns erupt in fourth quarter to race by Mavericks for 2-0...