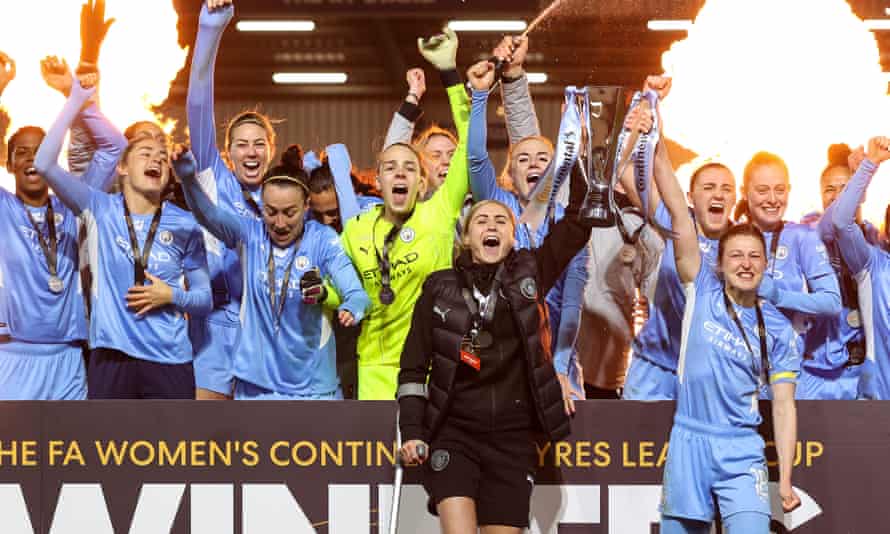 The Manchester City forward is talking on the eve of Sunday’s FA Cup final against Chelsea at Wembley, with her team having finished third in the Women’s Super League to claim the final Champions League spot. Having already won the Continental League Cup, it is impossible not to share her pride at City’s incredible turnaround – and a recovery that mirrors her own struggles.

By mid-November, they had taken seven points from their first seven games, losing four times – as many as they had in the preceding three seasons combined. They were hampered by injuries, with a number of their Team GB players sidelined after returning from the Tokyo Olympics, including the club captain, Steph Houghton, the goalkeeper Ellie Roebuck and the Lionesses’ record goalscorer, Ellen White. Kelly was out too, having torn a ligament in her right knee on 5 May in the penultimate game of the 2020-21 season.

At one stage, City languished in ninth with the league title all but lost as Chelsea and Arsenal cantered ahead, their Champions League hopes diminishing. In that context a cup double would be a remarkable achievement, but for City, so used to fighting for the biggest prizes, it is not enough.

“The Conti Cup was massive,” says Kelly, who watched that game from the stands. “As a group we went into it with a lot of confidence, based on our performances since Christmas break. Going into it with confidence was great and the girls performed brilliantly, got our tactics right and it was a great day for us – but it just made us hungry to be even better.

“To be in the FA Cup final, winning the Conti Cup and qualifying for the Champions League, that’s what this club should be doing, and fighting for titles as well. It’s great to be in the Champions League next season but we want to win the WSL. So while we should be satisfied with what we got this season with the tough start, next season we have to be pushing for the league as well.”

Since that 3-1 defeat of Sunday’s opponent’s, Chelsea, in the League Cup final, City have welcomed back Kelly. The 24-year-old returned to action in a 2-0 victory against West Ham on 2 April, coming off the bench in the 59th minute. “I’ve enjoyed every minute of being back on the pitch,” she says. “And I’m thankful to be getting as many minutes as I have. Off the back of an injury, it’s not very likely to get as many minutes as I have done. But I don’t want the season to end now. I’m back on the pitch and it’s a bit sad that the season’s coming to an end.”

The end to this season, though, is better than last. Her injury prevented her from taking her likely place on the plane to Tokyo and she had to watch from the sidelines as City struggled. It was “a difficult time,” she says.

“Being injured and not being able to help the team in any way made the injury even tougher. It was just a case of getting through it and ticking off each day and having good people around you.”

The perception of ACL [anterior cruciate ligament] injuries does not help the recovery process, she feels. “I don’t like the whole negative aura around the ACL. I feel like sometimes you go into that rehab with such a negative mindset because everyone speaks so negatively of having an ACL injury.

“People have overcome that injury in the past but the negative stories are the ones that always stick in your head. It was a tough time, but any injury is tough. You speak to [teammate] Esme Morgan, she’s had tough times with her injury, which is a completely different injury to mine.”

Kelly spent much of her rehab away from the team, traveling to the US to work with the reconditioning expert Bill Knowles in Philadelphia. “That was really good for me,” she says. “It gave me so much confidence in my movement and just a different side to the rehab.

“Focusing on the movements really benefited me, it gave me so much confidence. That’s probably the hardest part to get. You have to really trust that area can take certain movements and then you build the strength off of that.”

It is the support in rehab she thinks has helped her slot back into the team with such ease. “I was never, and I’m still not scared. Because I know that I’ve put in so much effort and the people around me have put in so much effort,” she says. “I feel good on the pitch, I feel myself. I still think I’m not back to my best, but I wasn’t before my injury, I still had so much more to give.”

Now she has one last chance to shine with City and do enough post-season to win a place in Sarina Wiegman’s England squad for this summer’s Euros.

“I’ve hit the ground running quite well, with my stats as well, with the goals and assists that I’ve got since coming back. I just want to finish the season strong in the FA Cup and then we’ll see what happens in the summer.”

Kelly believes City can take heart from their defeat of Chelsea in the League Cup final. “They’re not going to be the same Chelsea that we played in the Conti Cup but we’re not the same team that they played either.

“There’s a lot of confidence around the group, the football that we’re playing at the minute is brilliant and we’re all enjoying ourselves.”

The Fiver A dodgy ticker, title celebrations and more

US to end Russia’s ability to pay international investors

Warmth and charm are constants in Kammy’s career