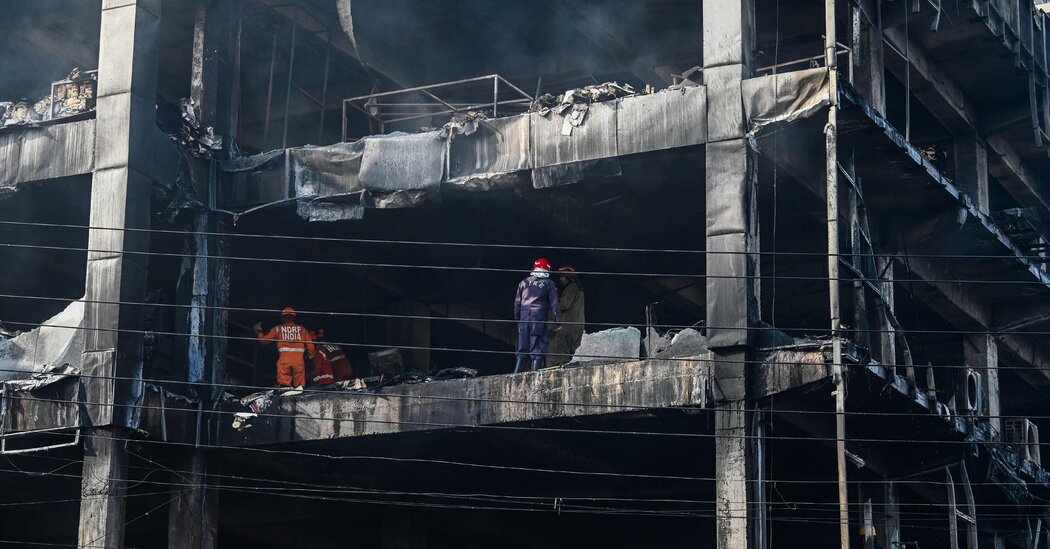 NEW DELHI — Rescuers were searching for victims on Saturday in the ruins of a New Delhi commercial building that was gutted by fire the night before, leaving at least 27 people dead. Officials warned that the toll could rise.

The fire began a little before 5 pm on Friday in the four-story building, which housed a number of manufacturing operations that made closed-circuit television cameras. Most of the dead were assembly line workers, officials said.

Videos taken at the scene – in the Mundka neighborhood in western New Delhi, the Indian capital – showed smoke pouring out of the building’s windows, as crowds watched firefighters rescue people who had been trapped inside.

Atul Garg, New Delhi’s chief fire officer, said firefighters had initially struggled to reach the building because the area is heavily congested. About 130 firefighters were sent to the scene, and the fire was extinguished around five hours after it started, he said.

“Because the temperature is close to 45 degrees Celsius” — about 113 Fahrenheit — “more fire incidents are taking place,” Mr. Garg said, referring to India’s current heat wave. “These days we get nearly 160 fire calls per day.”

The building was crowded with workers and other staff members when the fire broke out. About 50 people were rescued from the building, several of whom were critically injured.

Each year, fires kill hundreds of people in India, many of them impoverished workers. Investigators often trace the cause to faulty wiring or lax enforcement of building codes. Activists say that officials often fail to enact safety measures or to punish those who violate regulations.

Last year, a fire in the infant care unit of a hospital in the central city of Bhopal killed at least four newborns. In 2019, at least 18 people died after a fire broke out in a commercial building in the western state of Gujarat.

The cause of Friday’s fire in New Delhi was not immediately clear. Investigators said on Saturday that they were looking for the building’s owner and that they suspected safety measures had been violated. Parts of the building had yet to be searched, and officials feared that more bodies would be found.

27 school shootings have taken place so far this year

After Julie’s mortifying moment in college, a classmate knew just how...

Tennis star Naomi Osaka is launching her own sports agency